The Year of the Shrew, Part One: Pastime Passing Excellent

When I first heard that SF Shakes was doing Taming of the Shrew, I wondered how anyone could take on this play now, here in San Francisco. Rebecca Ennals makes a strong case for looking beneath the surface anti-feminism and fighting. I can’t wait to see the performance. 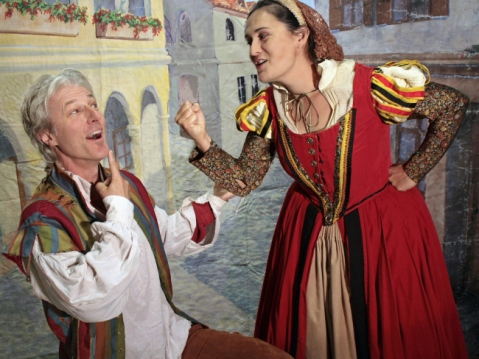 Tim Kniffin (Petruccio) and Carla Pantoja (Katherina) in SF Shakes’ upcoming production of The Taming of the Shrew.

Next week, we go into rehearsal for The Taming of the Shrew, and the season we’re calling The Year of the Shrew kicks into high gear. From the moment when we decided to produce this controversial comedy, I have immersed myself in research of past productions, arguments for and against the play, and my own concerns about how to present it. With this production, I want to reclaim the word “Shrew” and tackle the issues of female dis-empowerment in the play head-on. I hope to find in Katherina a damaged proto-feminist, and in Petruccio a reformed misogynist turned male ally – two prickly outsiders finding their way to each other in a culture full of gender-based expectations. And, of course, I want it to be very, very funny. All this…

Trigger Warnings and the Problems of Required Labeling

When I was teaching college, I would have argued strongly that college students should be prepared for whatever readings the instructor wanted to assign. Looking back in light of current discussions of trigger warnings, I’m re-thinking my position, but it’s also becoming more nuanced.

Initial discussions of trigger warnings have been met with mockery or assertions that “we would have to label everything because someone might be offended by almost anything.” Yet generalized warnings hardly help. Those of use who spend anytime in California are often treated to (clearly legally mandated) signs asserting “This facility uses chemicals known to the State of California to cause lung cancer.” The problem with this warning is that it’s so broadly applied and so vague that it’s useless. What do I need to do with the information? Am I supposed to run through the facility without breathing? Never go in? Something about warning labels brings out the smart-aleck in me. A more effective warning label hangs in my dentist’s office on the x-ray machine cabinet. It says in English and Spanish, “If you are (or might be) pregnant, please tell us so that we can take extra precautions.” This warning is clearly targeted and connected to an action plan. They defer non-critical x-rays and use extra shielding for essential ones.

The discussion around trigger warnings is starting to move in this direction. A recent (but not yet posted) interview on KQED’s Forum mentioned letting students know about specific topics in specific readings, rather than a general warning. Telling students that a particular work has graphic images of violence or deals with suicide or rape enables them to get support and take care of themselves. Putting the information in the syllabus or course description lets students make informed decisions about whether they can deal with a particular topic in a particular semester. Reading about an older person’s death might be comforting or overwhelming if one is also facing a family member’s death. Russell Smith’s article in The Globe and Mail makes an even stronger case for doing this out of “human decency.”

Best of all, such warnings don’t hurt the literature. Romeo and Juliet carries tremendous power, even if you know they both commit suicide. Hamlet too, and Mrs. Dalloway. Yes, literature is about difficult topics. It helps us face them, think about them, talk about them. Knowing what kind of difficult conversation we’re about to have is not only compassionate, but makes for a better conversation. Let’s continue to showcase good examples of warnings that are specific, targeted, and actionable.